Mixxim brings back the cassette… as a music player 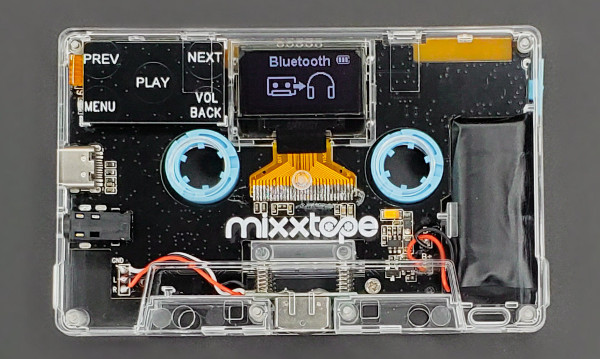 The audio cassette will not die. The latest attempt to revive the 70s relic comes in the form of a Bluetooth-enabled digital music player that doubles as a legit cassette tape – legit because it will actually play on some cassette decks.

Dallas-based Mixxim launched a $10,000 Kickstarter campaign in 2017 to fund its patented MIXXTAPE and ended up raising $121,550 from 1,795 backers in 30 days. The player is now available with free shipping for $75 from the company’s website when you use promo code MIXTAPERY at checkout (regular price is $100).

Behind the nostalgic cassette case is a music player with 8 gigabytes (GB) of internal memory that can be expanded to 256 GB with a microSD card and a lithium-ion battery that’s said to provide over 6 hours of continuous playback. The player has a headphone jack but also supports Bluetooth-enabled wireless headphones.

As Mixxim puts it, “MIXXTAPE is retro design and cutting-edge technology magically fused into one totally fair device.”

The idea is to transfer music, podcasts and audiobooks from your PC/Mac to the player via a USB-C cable (included) and use its touch control panel to manage playback via an OLED screen 1 inch. Supported file formats include FLAC (16-bit), AAC-LC, MP3, WAV, WMA, M4A, OGG, APE, and ACELP.

Yes, you can insert MIXXTAPE into a tape deck (if you can find one) and it will play – but only on decks that don’t have tape motion sensors. I guess you won’t know until you try…

“It was imperative that MIXXTAPE not just be a cassette-like digital music player,” said inventor Paul Burns. “It was actually supposed to play like a tape. Originally it was a combination of many little bits that made tapes what they were: the sound, the physical object, the personalization, the personalization, the “accessibility, secrecy, community. Plus, the music was so much more than music files and virtual avatars. It was tangible, meaningful, and personal. MIXXTAPE takes that back in its own way.”