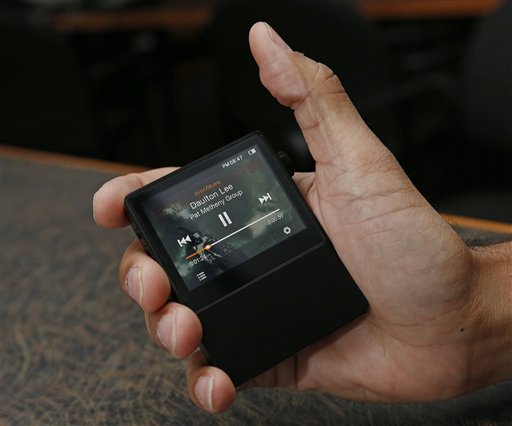 It’s hard to make headlines with a portable music player these days. It’s now an old hat to carry thousands of songs in your hip pocket, whether on an iPod or a smartphone.

But there has been a price for portability. You listen to your favorite music delivered only after a host of technologies have lowered the resolution of the audio, out of necessity, so that it can exist in a small digital file and make it to your ears. Sounds good, but the makers of a new portable music player are betting there are still people out there who want even better quality.

Astell & Kern’s new portable music player, the AK100, delivers. About half the size of a pack of cigarettes, the AK100 offers the ability to play music files with more than six times the information of your standard CD, and several times beyond that of a popular MP3 file. but modest. At $699, it’s also almost five times the price of an iPod Nano.

Much of the magic of the AK100 lies in its 24-bit Wolfsen DAC, or digital-to-analog converter, which is a small piece of technology that converts the binary code of a digital music file into an analog signal your ears can hear. It does this better than anything else in your briefcase or pocket.

MP3 files and a related format called AAC are most common in digital music players such as the iPod. But converting your CDs to these formats or purchasing your music through iTunes results in a music library with moderate sound quality. The sound is good, but the music would sound better if it wasn’t so digitally compressed after being mastered in the studio. These formats are often described as lossy because you lose data during the compression process.

In contrast, the higher quality FLAC format used in the AK100 is lossless, meaning no shortcuts are taken for file size reasons. Files of this type cannot be purchased over the counter or ripped from your existing CDs. High definition albums have been mastered to perfection and are sold online through retailers such as HDtracks.com.

For perspective, CDs only contain 16-bit resolution after the remastering process, and MP3 files are several rungs up the quality ladder. Why is this so-called bit depth important? Because it helps to determine the amount of actual information contained in the recording. There is much more data to define the sound in a 24-bit mastered audio file than a standard 16-bit CD file.

And given the right speakers or headphones, you’ll hear that difference.

The AK100 sounds better than anything I’ve ever listened to while walking around in public. It was really impressive. I’ve tried the AK100 with a variety of stylish headphones in the $100 to $400 range.

When paired with high-quality reference studio headphones from Shure, John Coltrane has never sounded so smooth. It’s one thing to listen to jazz in your car or on your phone and hear the magical cadence of a solid quartet. It’s quite another to hear the very breaths of a master musician attacking a reed instrument. There are nuances to appreciate in a finely recorded jazz session, and the AK100 is capable of reproducing these important relationships between signal and silence.

The same songs played on several other digital devices failed to deliver the same audio experience, even using the same headphones. The AK100 delivers the kind of quality typically reserved for custom listening rooms filled with high-end audio components and expensive speakers.

Other genres have also benefited from the 24-bit recordings that the AK100 can play. Rich guitar work on Led Zeppelin’s “Ramble On” gave way to Robert Plant’s crystal clear vocals. When John Bonham’s drums take over, it’s like thunder coming from afar and crashing in front of you.

Even listening to Simon & Garfunkel perform “Cecelia” with 24-bit clarity is a revelation. A pleasant, energetic galloping song suddenly became a real force, the echo and crackle of percussion instruments turning into a beautiful frenzy that I could finally discern in detail.

There were only a few hiccups in my experience with the AK100.

Several of the Pat Metheny band’s songs took significantly longer to load and play than all of the others, which started instantly. I don’t know the reason for the delay, but it was frustrating.

Also, the on-screen equalizer is a bit confusing. There are dots to swipe and on-screen dials with frequency numbers to spin. A simpler design to access these adjustments, which are important, might have helped.

The physical design of the device is very neat and professional. It has a black metal finish with a nicely knurled volume knob on the right side. The screen offers touch control for basic playback and music library functions. Three buttons on the left side let you play, pause, and skip tracks forward and backward without relying on the touchscreen.

The high definition audio world made possible by this product will not be for everyone. Beyond its own high price, audiophile-grade album downloads are also more expensive than their iTunes counterparts. For example, Green Day’s “21st Century Breakdown” is $17.98 for a full 24-bit album download at HDtracks.com. The same album is $11.99 on iTunes.

Plus, you won’t find as solid a selection at online high definition audio retailers as you do on iTunes. Songs must be specially mastered in the studio to deliver the true 24-bit sound experience. There’s a nice range of music from classical to heavy metal, but it’s still a fraction of what’s available in lower quality at other outlets.

These highest quality audio files also take up more storage space. Your typical MP3 file weighs around four megabytes for a four-minute song. The same song in a lossless format for the AK100 occupies about 200 megabytes.

The AK100 comes with 32 gigabytes of built-in storage. That’s enough space for around 160 four-minute songs if each one is encoded at the highest quality the AK100 can play. In contrast, a 16 gigabyte iPod Nano can hold around 4,000 MP3 songs. The AK100’s memory can be expanded to 96 gigabytes with additional memory cards, but you’ll need to be discerning when filling it with audio of this quality.

The AK100 plays lower quality formats including MP3, OGG and WAV. If you only fill it with standard MP3s, it will hold thousands of songs, like most traditional digital music players.

The AK100 player also has built-in Bluetooth technology, allowing it to stream audio wirelessly to connected devices such as Bluetooth-enabled speakers. It worked fine, but the high-definition audio fidelity is best experienced with proper headphones.

With the AK100, you won’t be able to view photos or videos or make phone calls, as the iPod Touch offers. The AK100 does one thing – play music – and does it very well.

Is the difference worth it? For some, maybe. Others won’t care about that difference, can’t hear it, or decide it’s not worth the extra cost even though they can hear it.

But for those who really appreciate a good recording and want to hear something as close to the original as possible, the Astell & Kern Player is a refreshing device they’ll probably adopt.

More information:
About the AK100:

Astell & Kern’s $699 portable music device from iRiver can play high-quality audio files, sounding better than iPods and other digital music players. It comes with 32 gigabytes of storage, enough for around 160 top quality songs. Memory can be expanded to 96 gigabytes.

Copyright 2012 The Associated Press. All rights reserved. This material may not be published, broadcast, rewritten or redistributed.

This document is subject to copyright. Except for fair use for purposes of private study or research, no part may be reproduced without written permission. The content is provided for information only.