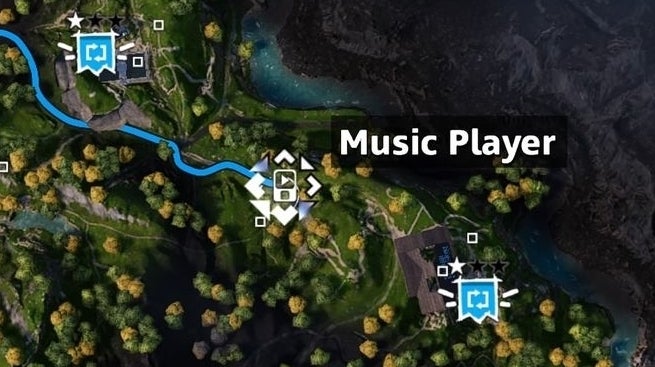 Like the Far Cry New Dawn photo locations mission, it’s not particularly taxing, but it’s a nice way to spend an evening, especially if you like scratching that collectible itch.

Unfortunately, there’s no trophy/achievement to square this collection, but you’ll get five handy perk points as a reward for struggling to complete the Audiophile assignment.

To get started, just grab a music player – any will do – and the side mission will begin.

Finally: While we’ve done our best to avoid spoilers, even the locations and ratings themselves may contain unwanted spoilers, so please exercise caution if you’re trying to stay spoiler-free!

To note: When we say head east, we mean head right as if looking at the map. For a few of them you’ll need your grappling hook, and for a few others you’ll need the hook, so if you haven’t unlocked it in the perks menu yet, you better complete some challenges . Yes, we said “unlock” when talking about a hook. Yes, that was a terrible pun. No, we are not sorry.

Okay, so we say it’s Redler’s Hollow, but actually it’s a bit west of that. Head west until you hit the water, turn left and you’ll soon come to a tired and rusty bridge. A note pinned to the door suggests you swing in the back.

Hang in there, jump out the window and the music player is yours.

East of Big Mike’s Dale less than 40 yards you’ll hear the music player before you see it. You’ll find it hidden inside a prep bunker, along with a whole bunch of other goodies. Enjoy.

Head west down a steep incline and you’ll hear the music… then realize the player is nowhere to be found. Boring, huh?

It turns out that we have to enter from below via a hidden cavern. If you hunt along the cliff just a little east of where it says “Frobisher’s Memory” on the map, you should see a lamp pointing the way (day or night).

Head there, enter the cave and head to the lighted areas where you’ll find a makeshift bed and a letter from a very salty teenager. Turn right and you’ll see the telltale ropes of a “Hey! Here’s a place to climb!” flange. Hang on and you’ll find the elusive music player.

Easy, this one. Head to the Sanctuary of Sein and follow the music. The player is in the ground, hidden – badly – by wooden planks. Hit them and help yourself.

Another single. Well. Ish. Head to Tombwater and find this dilapidated shack. You’ll see – and hear – where the music player is almost immediately, but you’ll need the lockpick advantage to get into the room and snag it.

Repeated rinsing! Again, you’ll need the lockpick advantage, and again, you need to head into a building that’s almost entirely reclaimed by nature. Enter through the back door and once you’ve entered the room, the player hides behind the wooden planks – you’ll hear him before you see him, of course.

This one too is hiding in a prep bunker, so you’ll hear it for quite a while before you see it. Eliminate the goons and drop down to claim the player.

Although almost entirely buried, it should be fairly easy to spot these freight trains (at least I think they are trains?) pushing out of the hill. Again, you’ll hear the player before you see them, and again, just flip the boards and grab your music prize.

Head north out of Prosperity and you’ll come to Bradbury Woods. Follow the (now incredibly tedious) music and you’ll find this dilapidated dwelling.

Despite being boarded up, there’s clearly something behind the boards – and it’s even easier to see at night – so smash through those boards and use the music player… even if it’s is just to keep this fucking thing from playing the same tune over and over again.