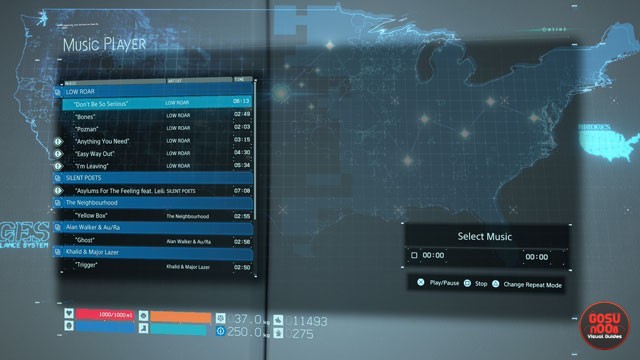 How to use the music player in Death Stranding Open World – How to play music outside of a private room?

To use the music player outside of the private room, in the open world, there is only one option for you. Go through the game until you have the opportunity to create your own constructions. You can also upgrade said structure, and at level 2 the game allows you to customize your build. You can put various holograms to greet people who meet them, but you can also put a song that you have unlocked, which will play as people approach it.

This is the only way to play music in Death Stranding in the open world. The game does not offer any options, for example, a portable music player. It makes a bit of sense. Music playing in different regions and situations is important for the overall feel, so allowing yourself to listen to what you want can reduce the severity of the situation. For this reason, you also cannot use Spotify with the game to play the official soundtrack as you like. You can listen to the playlist on your phone while playing the game, sure, but that’s not really it, is it?

How to listen to music in Death Stranding?

For listening to music in Death Stranding other than building in the open world and just using Spotify on your phone or whatever, the only other option is your private room. Any private room will do. To listen to music in your private room in Death Stranding, look to Sam’s right and activate the terminal, aka the large map on the wall. One of the options you have in the terminal menu is the music player, so put on the music you want to listen to while you relax. That is, if you’ve unlocked it, of course. It’s probably when you unlock the Soothing Sounds trophy that you get the first time you use the music player.

I believe that’s all there is to it when it comes to listening to music in Death Stranding, both outside of a private room and indoors. For more help, I refer you to our other Death Stranding guides. Like, for example, pre-ordering a Gold Hat, Sunglasses, and Speed ​​Skeleton Slot, increasing weight and carrying capacity, and unlocking more Delivery Bots.