A look at a preview of the Dopamine 2.0 music player 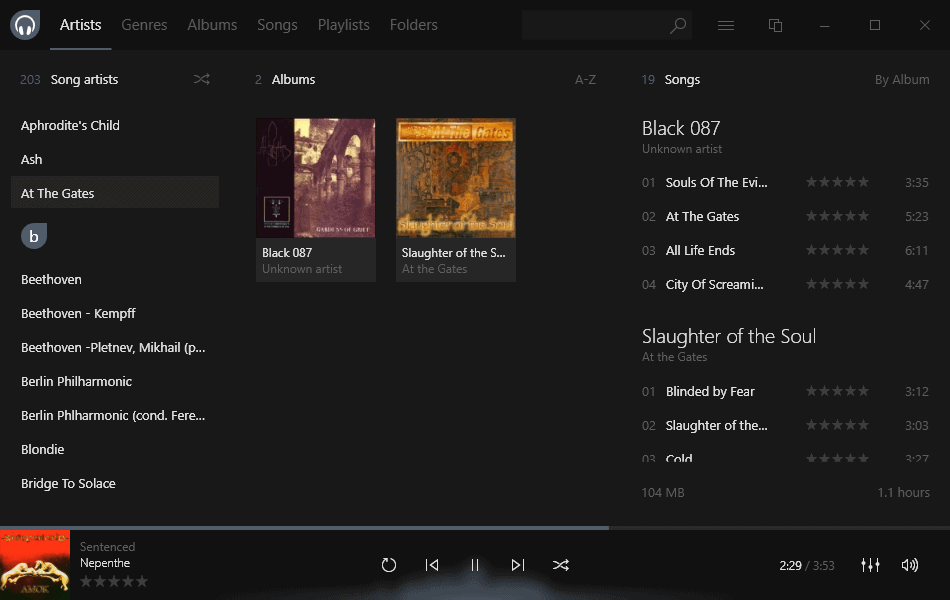 Music player developer Dopamine is working on the next major release, Dopamine 2.0, at the time of writing. He’s released two previews of Dopamine 2.0 so far and we’ll be taking a look at the second preview released today.

We reviewed Dopamine 1.2 in December 2016 and found it to be an excellent music player for Windows provided you don’t mind the relatively high memory usage.

The first preview of Dopamine 2.0 was released in June 2018, the second one today on October 15, 2018. The biggest change in the new version is the new look and feel of the app as well as the new functionality to view folders and smart playlists.

To note: Dopamine 2.0 is available in preview. Things may change during development, and changes may be made that remove, move, or modify the features described in this preview.

The interface of the music player has not changed so much if compared to version 1.2 released in 2016. Users who already use the program do not have to get used to a brand new interface which should reassure them.

However, some things have changed. You may notice that the Collection – Settings – Information list at the top has moved and the top toolbar houses the search box and the new Settings icon in the new version of the app.

The rating and “love” options have been moved to the lower left corner and there are some other minor changes to the interface.

Smart Playlist is a new feature in Dopamine 2.0 for creating playlists based on criteria you specify. Go to Playlists > New Playlist > Smart Playlist to create a new smart playlist in the program.

Select one or more criteria for the playlist, for example a rating of at least four stars, the genre Heavy Metal, the year 1984, to have Dopamine create a playlist based on these criteria.

Use as few or as many criteria as you want in the smart playlist creation window. All that remains is to select the limit of songs for the playlist and decide whether the songs should meet all or just one criteria.

Smart playlists are not dynamic at the moment and it is not clear if this feature will be added to the function later. Dynamic would simply create a new playlist based on the selected criteria upon user request or even automatically based on the settings.

Dopamine 2.0 already supports most of the features of previous versions of the music player. You can use it to retrieve lyrics from the Internet, for example to display them while music is playing.

Tip: Check out music player alternatives such as AIMP, MusicBee or one of them.

The Dopamine 2.0 preview provided an improved experience over the previous version. The interface changes are slight and not only made to make changes to new versions of the program.

The new feature, Smart Playlist in particular, is interesting because it adds another useful feature to the app. However, functionality is somewhat dependent on proper tagging and the use of ratings and other user-added content.

The only downside right now is that the memory usage hasn’t really decreased or increased.

Now you: what music player do you mainly use?

A look at a preview of the Dopamine 2.0 music player

A first look at the upcoming version of the Dopamine 2.0 music player for Microsoft’s Windows operating system and its changes.